The news is filled almost daily with reports of terrorist attacks around the world – Paris, Brussels, Seattle, Kansas City, Ottawa and Brooklyn – to name a few. There is a sense that the world is out of control as fanatics walk the streets and attack the innocent. Where will it end?

Numerous incidents in recent weeks, including strange or unwelcome visitors entering synagogues, have the leaders in our community on heightened alert. There is widespread belief by security experts that our facilities are being profiled. 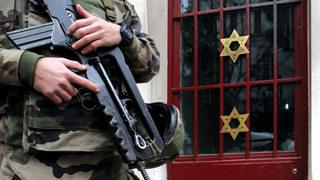 What is more important than the safety and security of the thousands of people who enter our synagogues, our schools, and other community buildings? As a community, hundreds of millions of dollars have been invested in our infrastructure and these buildings – and the people who use them – must be protected.

All around the community, cameras are being installed, guard protection increased, locks are being changed, and entry doors to facilities are being more carefully monitored and limited. The security of the 10,000 students attending yeshivot in our community is a major concern. One community member told me she will no longer attend certain synagogues until security is improved.

In policy-changing legislation, NY Councilman David Greenfield and Speaker Melissa Mark-Viverito, reached an agreement with Mayor Bill de Blasio to enact legislation that provides non-public schools with private security officers. The mayor is expected to sign the bill into law by press time.

While most of the yeshivot in our community have guards on duty, as well as cameras and some security, the cost for the guards is included in students’ tuition. By alleviating the schools of the cost of paying the guards, school security costs will decrease significantly.

Under the final bill, yeshivas, Catholic schools, and other private institutions with 300 or more students will be able to hire unarmed security and get reimbursed by the city for the cost of their salaries. Larger schools will get more guards, based on 500 student increments. A school with 1,000 students, for example, will receive three security guards (one guard to be allotted for the first 300 students, another guard for the next additional 200 students, bringing the student figure to 500, and another guard for the next 500 students, for a student body of 1,000). About 200,000 city students will be covered by the legislation. Schools with a Universal Pre-K program already receive security funding, and UPK students cannot be counted toward the total number of students in the school for securitypurposes.

“In my six years as a Council Member, I have made it my mission to fight on behalf of non-public schools on critical issues ranging from special education to after-school vouchers and now security,” said Councilman Greenfield, a friend of the community. “Of all these things, I feel most strongly about this bill, which will enable us to educate our children in a safe environment. I sincerely appreciate your support throughout what has been the most challenging legislative process of my career.”

Unarmed guards will be paid at the prevailing wage of $18 per hour. They must be licensed, and the company that provides the guards must also be licensed and approved by the City of New York as a vendor. The guards must also receive training on the behaviorand development of school-age children.

Councilman Greenfield said that 90 percent of all security situations can be resolved by unarmed guards. The Department of Education believes it may be dangerous for the guards to carry weapons in a school.

Greenfield, former Executive Vice President of the Sephardic Community Federation, began Teach NYS during his tenure. Teach NYS is a grassroots organization created to improve the quality of education for children in NY State. Now under the Orthodox Union, OU-Teach NYS aggressively advocated forthe bill. The agreement caps more than two years of grassroots advocacy by OU-Teach NYS to better protect all its students.

“As security is increased in light of recent events and religious communities face especially heightened concerns, it is especiallycritical that all students are protected regardless of what kind of school they attend,” said Maury Litwack, Director of State Political Affairs for the Orthodox Union.

“Every child deserves a safe learning environment, and the agreement is a significant victory for the thousands of families who stood behind this bill. We thank Mayor de Blasio, Council Speaker Melissa Mark-Viverito, and the entire City Council for taking decisive action to support the non-public school community during this challenging time, and we thank Council Member David Greenfield for his unyielding, determined advocacy and leadership,” said Allen Fagin, Executive Vice President of the Orthodox Union.

According to Councilman Greenfield, the bill had 45 co-sponsors. He said the budget for the guards is capped at $18.8 million. However, each year the new budget has to include funding based on expected school populations and changes in prevailing wages.

The legislation is opposed by the teachers union because they believe it is not consistent with the separation of church and state to use taxpayer dollars for anything involving private religious schools. However, Council Speaker Melissa Mark-Viverito said she believes the measure would survive any constitutional challenge. “What we’re doinghere does not advance religion per se. This is about keeping our children safe,” she said.

The legislation occurred just when a new non-profit group, Community Security Alliance (CSA), was founded. CSA was organized to help ensure the security and the safety of our community’s institutions.

Community leaders Morris Dweck, Richard Chera, Ayal Horovits and Morris Missry, along with a committee, began reviewing security at community buildings. They found that security was lax, training needed to be enhanced, and that procedures were inconsistently applied. In some synagogues, doors were left open orunlocked, and in generalthere was a feeling that security
was compromised.

CSA is committed to proactive planning to avert potential tragedy.CSA has confirmed that our community’s buildings are under surveillance and are being profiled. The very idea thatthere might be an active shooter in one of our synagogues or community buildings is frightening.

CSA has hired a security consultant to vet and train guards, and provide the facilities with risk assessments and operational procedures so they will know what to do in case of an incident. In addition, on Shabbat, a highly-trained supervisor will go to the CSA member synagogues to watch procedures and ensure the guards are doing their jobs. CSA will be implementing a complex radio network, so that if there isan incident at one synagogue, chasv’shalom, the other area synagogues can be alerted.

“CSA focuses on the safety and security of our facilities and serves to protect their members,” said Morris A. Dweck. “Our belief is that a thorough and proactive program, that is carefully coordinated and consistently applied, will enhance community-wide security effectiveness. Combined with a strong educational program,our community will be better protected from growing security threats.”

Since the World Trade Center attack on September 11, 2001, the world has changed in unexpected ways. Global terrorism is now a fact of life. There have been attacks on Jewish communities from Melbourne to Berlin, from San Francisco to New York. As violence rises in the Middle East, Jews around the world become targets of hate crimes and terrorist attacks, which are becoming increasingly violent and deadly.

Threats by radical Islamic groups such as ISIS, racist elements such as Neo-Nazis, and random “lone wolf” assailants are targeting Jews. Bias crimes against Jews represent more than 60 percent of religious based hate crimes, according to the FBI’s Unified Crime Reports. There have been reported incidents of harassment and physical assaults on Jews in Brooklyn and several of our own community buildings have experienced security threats. There were two incidents at Ahi Ezer in December alone.

Greenfield’s legislation will help fund guards at our community’s yeshivot. The work of CSA will enhance security at synagogues and many other community buildings. In the face of terror, we must protect our children, families, and community.

If you see something, say something. Call 911 or the NYPD Terror hotline at 1888.NYC-SAFE.